Subtitled A Thousand Years of Europe’s History, this impressive but difficult work does pack a millennium and quite a bit of detail into seven hundred or so pages.  When I was younger, dazzled by Medieval Total War, I quite fancied the idea of a single volume history of the HRE.  Later I realized that that could be a quite hefty prospect (like the dry and extensive The Dutch Republic by Jonathan Israel), but then this book came out – and superficially seemed to be promising that.  Hopes were raised by the easy going cover, blurb and subtitle. 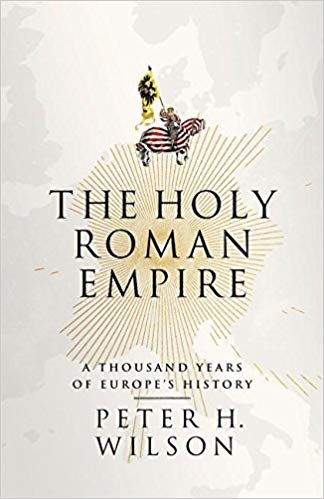 They were then scattered by the restaurant-tasting-menu style table of contents.  Single word chapter titles like Association and Governance for chapters spanning seventy pages.  No sub-divisions listed here.  And indeed some of the chapters are heavy going – particularly the opening ones on ideology and the relationship between church and state.  Sorting the history thematically means that each chapter crosses back and forth between that thousand years of history in a baffling way unless you are familiar with the events and characters of the empire.

Some later chapters do flow more chronologically, but even they rely on a lot of pre-existing knowledge.  Major events are brushed over in a few words, new people appear without introductions.  The ending tacks on a short bit on the legacy that verges between the interesting (changing views amid the rise of 19th century nationalism) and the unfortunately outdated (lessons to be learned in EU comparisons).  To give these topics the attention needed would really be a whole other book, so it feels like an inessential finale.

To say some positives about it – Wilson clearly has a great command of the material, and doesn’t lower his level for the reader.  By taking the focus away from the great men of history and from material culture, he really gets to deal with things on the level of ideas, justice, identity.  He gets to deal with mis-conceptions about the weakness of the empire or the push and pull of (de)centralisation.  It’s fascinating, in a very involved sort of way

PS. It’s page 2 before Wilson uses the Voltaire quote, if you were wondering (as I was).