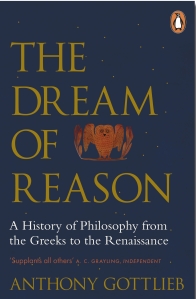 Subtitled A History of Philosophy From The Greeks To The Renaissance.  In terms of the range and the content, I guess this was what I should have expected: a history of the western canon skimming quickly past the periods and regions of marginal interest (ie. medieval times and the Arabic world).  This is fine but I did enjoy Peter Adamson‘s Without Any Gaps podcast where he has been filling in the detail skipped by more conventional histories (like this).

For the majority of the book Gottlieb looks at the Pre-socratic philosophers, then the trio of Socrates, Plato and Aristotle.  He gives biographical details (where he can) and brief introductions to their thought.  It is a short book and these introductions don’t necessarily have the most depth, but I think he strikes a good balance of accessibility and not watering down the ideas to absurdity.  He’s clear, concise and often very enjoyable to read.  Later thinkers from the Stoic, Epicurean and Sceptic get useful but less involved treatment, but afterwards the book feels patchy.  The likes of Augustine, Boethius, Plotinus, Aquinas, Bacon feel more like a tacked on epilogue.

With all this speed and selectivity (going somewhere that may become apparent in the rest of the planned trilogy), some topics and styles are dealt with better than others.  The most vivid parts of the book are with the reasoned but aphoristic pre-socratics; the least with perhaps the more mystical elements.  It’s a solid introduction – certainly not complete in who it covers, and occasionally how (George Steiner in the Observer complained about a lack of analysis into why this sort of thinking developed).  It feels like Gottlieb would rather show how an idea or way of thinking is useful (even abstractly) – regularly connecting philosophy to other topics – and it feels like his coverage is weighted because of this.

This was definitely a book to have read after Donald Kagan’s work on the Peloponnesian War.  Popper attacks the ‘historicism’ and totalitarian elements within Plato’s work.  This involves a certain amount of biographical speculation about the Greek philosopher and his teacher Socrates.  We know that there was a struggle between the populist democrats and the exclusive aristocrats in Athens (as in many other Greek cities), and that Plato had an aristocratic background and many aristocratic connections.  For Popper, Plato over the course of his career changed from the democratic, compassionate views that he had learned from Socrates back to the aristocratic authoritarianism he was brought up in, and brought in some lessons from Sparta with it.

For Popper the philosopher king that Plato proposes in the Republic is a method to arrest change and promote stability at any cost, to establish and keep a hierarchical system that Plato sees himself at the top of.  In seeing history as a constant process of decline from an earlier, better, tribal society, he tries to reconstruct that society and reverse the course of history.  I’m still to read part two, but as Popper presents it this does seem to mirror the historical theories of Marxism and Nazism (history as a process of racial decline).

It’s not even handed – it’s not meant to be.  Popper wrote this during the war, when he was in little mood for compromise.  If you are willing to go with some of his assumptions about Plato’s motivations, this is a compelling book.  But despite any regrets he may have had on tone, the core idea of the book is interesting.  The same ideas and criticism have come up elsewhere in my recent reading but not quite with the same focus and force (Hannah Arendt’s Origins of Totalitarianism; Black Mass by John Gray targeting modern neo-liberals).  Karl Popper is a very good writer, you just have to beware of being swept along by his polemic and missing some of the holes in it.

Plotinus has popped up a few times recently in my current reading (and listening).  He was a bit part of The Climax of Rome by Michael Grant that I posted on, underpinning much of the introspective shift in culture in third century Rome.  He was portrayed as instrumental in the intellectual development of Augustine in Robin Lane Fox’s superb biography Conversions to Confessions.  And I have been thoroughly enjoying Peter Adamson’s podcast The History of Philosophy (Without Any Gaps), in which his work also plays a major role.

However, through all that, I found Plotinus hard to pin down.  There is a big element of mysticism in his philosophy and it is difficult to tell how to take it, and how his contemporary and successors would have received it.  Pierre Hadot‘s short book is a great introduction to the man (what little we know of him) and his work.  In particular, Hadot manages to portray Plotinus as a teacher who was offering a spiritual way of life.

Basing his work on that of Plato and Aristotle, the pagan Plotinus developed ideas that would soon find their way into early Christianity.  His spiritual exercises and warnings against too much focus on earthly matters seems distant, but Hadot also shows a man who was grounded enough to join Gordian‘s invasion of Persia (in an attempt to learn more Eastern philosophy), teach lively classes with a wide range of influential students (there was even talk of the emperor Gallienus letting him start a Platonic city!), and show great kindness and awareness of those around him.

Hadot’s enthusiasm and admiration for Plotinus’ (and his student Porphyry’s) writing shines through, and although the book is a mere hundred pages I finished it with a lot more appreciation for the culture that surrounded these neo-Platonic thinkers.

Back in August, I wrote a post on Peter Adamson’s podcast series The History of Philosophy (Without Any Gaps). You can find more in depth thoughts in that post but, to be brief, I liked it a lot. It was clear, fun with an approachable structure that moved forward and built on what had gone before (both in philosophy and in the in-jokes). Adamson, a university professor, created the show in collaboration with the Leverhulme Trust and had on an array of academic guests to talk over the topics in detail.

The first section involved the greats of Greek philosophy – Socrates, Plato and Aristotle. It also covered many of their predecessors (this is “without any gaps” after all) with such big names as Thales of Miletus and Pythagoras. So where do we go next? Well, in his Late Antiquity section we begin with more Greek philosophers (including more household names) before moving on to the dominance of Plato and Aristotle in neo-Platonism, and finally the early Christian church.

END_OF_DOCUMENT_TOKEN_TO_BE_REPLACED

Covering the entire history of philosophy in one go is a tough challenge. Even covering an (so far) unfinished podcast series on the history of philosophy is pretty daunting. Peter Adamson in his series History of Philosophy (Without Any Gaps) makes it as easy as possible though, with an approachable and accessible style and structure. Each podcast episode is twenty to thirty minutes in length and covers a single philosopher or a single topic; generally following on in chronological fashion. The website is rather handily divided into broad eras (so far Classical, Later Antiquity and Islamic) which are then subdivided into smaller sections – this makes things easily navigable, but it is a continuous podcast and episodes do link neatly from one to the next (with the occasional interview episode). Unlike many podcasts, which are run by enthusiastic amateurs, this is run by an enthusiastic professor (based at King’s College London and LMU in Munich) with support from the Leverhulme Trust. Don’t be intimidated though, it works like the rest but perhaps with more confidence and an impression series of knowledgeable guests.